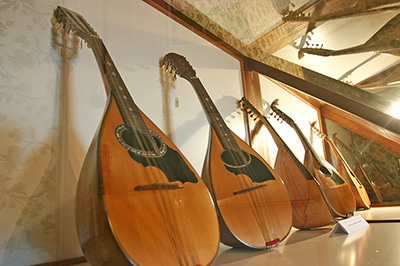 The art of creating stringed instruments has a long tradition in Arpino. Credit for that must be given to the workshop of maestro Luigi Embergher, a talented maker of strings during the second half of the 19th century, and his pupil and follower Domenico Cerrone, who succeeded him in 1938 and continued his work.

The workshop Embegher-Cerrone, which numbered over fifteen workers, was specialised in making “Roman” mandolins and used to produce some hundred instruments each month. Under Cerroni’s lead the production was extended to violins and guitars. Mandolins and other stringed instruments made in Arpino shop were exported in the whole world and appreciated for their  characteristics. Both Embergher and Cerrone were granted prestigious international awards.

In the museum it is possible to admire not only the instruments but also to follow the phases of the producing process, together with the techniques used in the historical Embergher-Cerrone shop.

In 1850 as many as 32 wool mills were in town and over half of the 15,000 inhabitants worked in the wool industry. Arpino products were exported everywhere and appreciated for their high quality.

The unification of Italy, the change of economic policies of the newly born state, the end of customs protection, together with the shift towards northern Italy of the national economic interests caused the decline of Arpino industry.

In the early 20th century many mill closed down and those left ended the production after the Second World War. The museum has on show the old equipments coming from the ancient Diodati wool mill.

An itinerary supported by historical documents shows the stages of the production. Together with tools and machinary, there are also the original colour used to dye the fabrics.

Among the projects, there is also a museum of the typography craft, an activity which was developed in Arpino during the 19th century.