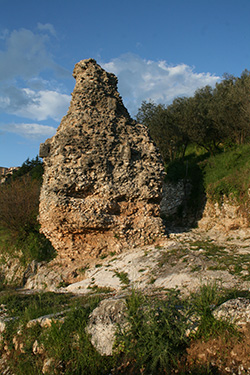 The origins of Arpino go back at the beginning of time. Legend has it that the town together with other Ciociarian towns (Alatri, Ferentino, Atina, Anagni) was founded by Saturn, the patron god of harvesting. Its first inhabitants have been identified with the mythical Pelasgians, the pre-Hellenic people who are believed to be the builders of the huge fortifications called “cyclopean or pelasgian walls”, which are still to be seen at Civitavecchia and in other parts of the built area. In truth, the first to settle in this area were the Volscians, whose presence is proved by documents since the 7th century BC. Conquered by the Samnites in the fourth century BC, it came under Rome’s rule with the status of civitas sine suffragio.

The town became the centre from which the Roman culture spread across the Liri Valley. In 188 BC it was granted the title of civitas cum suffragio which entitled the town the full right to Roman citizenship. During the rule of Caius Marius the Ager Arpinas, the land of Arpino’s Municipium, extended from the village of Ceretae Marianae, the modern Casamari, to Arce. During the Imperial age the town witnessed a period of decline and in the Dark Ages was conquered many times. As the Angevin dinasty conquered the Kingdom of Naples in 1265, Arpino was on the rise again. To this period belong many fortifications, among which there are the towers and castles of Civitavecchia and Civita Falconara. 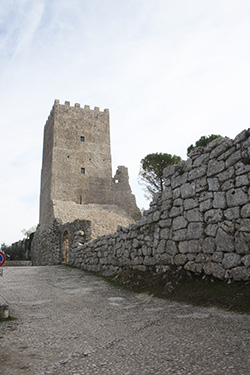 In 1409 the king of Naples Ladislaus of Anjou-Durazzo granted it the title of Crown property, so freeing the town from the feudal jurisdiction. The king also established here a garrison whose headquarters were the castle still called “Ladislaus castle” which overlooks Civita Falconara rock. The king himself used to spend long period in the castle, which was a strategic point for the defence of the northern border of the kingdom.
During the 16th century the castle was the residence of Vittoria Colonna, the wife of the marquis Francesco Ferrante d’Avalos, as well as poet, intellectual and a close friend of Michelangelo Buonarroti.

Bought by the duke of Boncompagni in 1583, Arpino became part of the territory of Sora dukedom until 1796. In the 17th and 18th centuries the town witnessed the greatest economic and demographic growth assisted by the development of the wool industry which made the Arpino name famous all over Europe as an active and industrial town. Wool mills using up to date manufacturing techniques were established and flourished and almost the whole population was employed in the industry.

Arpino became also a renowned cultural and educational centre, with the excellent boarding school managed by the Barnabite priests. 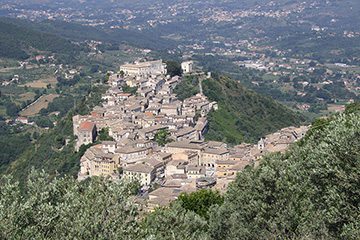 In 1814 Gioacchino Murat, at the time king of Naples, founded the Convitto Tulliano on the model of the French high schools.
The decline of the wool industry and the economic crise led to a massive migration of the town’s inhabitants to Northern Europe and America.
Today the town’s plant looks like a “x”: at the end of the four spurs there are the quarters Colle, Civita Falconara, Arco e Ponte, which join in Piazza Municipio, the heart of the town.

Today’s structure recalls strongly that of the 18th and 19th centuries when Arpino’s economy, arts and culture bloomed.