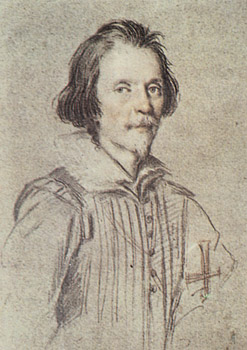 Giuseppe Cesari was born in Arpino in 1568 to a poor family that in 1582 moved to Rome. Here the young Giuseppe began to work as a shop boy in the painting of the Vatican Loggias. During the years of his training he learned from Taddeo Zuccari the mannerism style of the late 16th century. Since 1586 he was admitted to the “Congregation of the Pantheon Virtuous”.

He worked at the Palace of Cardinal Sartori, head of the Inquisition, and in the churches of Trinità dei Monti, St Silvestro al Quirinale, St Lorenzo in Damaso. He then went to Naples and frescoed the Sancta Sanctorum of St. Martino Charterhouse, a work completed by his brother Bernardino.

Under the protection of Pope Clemens VIII the Cavalier d’Arpino lived the most important and prolific period of his artistic life. Among his many works, he painted the frescoes cycle in the Sala dei Conservatori in Campidoglio and Jesus Christ Ascension in St. John Lateran. He made the cartoons for the mosaics of St Peter’s Dome and he frescoed the Paolina Chapel in St. Maria Maggiore.

In 1615-20 he arranged the building of a Palace at the entrance of Arpino and he lived there during his stays in his birthtown. Here, he painted many pictures of religious theme, that can be admired in the town churches.

Figurative arts have had great representatives in Arpino: the Cavalier d’Arpino and his brother Bernardino Cesari, who was an important painter too; the sculptor Domenico Mastroianni, founder of an artist family comprising his son Alberto, sculptor and caricaturist, his grand-child Umberto, a worldwide famous sculptor, his two great grand-children, Marcello, a great and never-forgotten actor, and Ruggiero, an esteemed film editor.

Mastroianni worked in Paris, where he made an important series of clay models, and in Berlin and Wien. His studio in via Margutta in Rome was the place where Umberto trained. In Arpino Mastroianni  sculptured the War Memorial (in corso Tulliano) and a bronze bas-relief dedicated to the Tulliano pupils died during the First World War. Among those who distinguished in the field of arts, Pasquale Rotondi (1909-1991) was an art critic and director of the Central Institute for Restauration; during the Second World War he saved thousands of works of art from Nazi plundering.