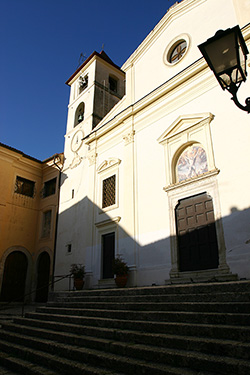 Located on the hill of Arpino at the foot of Civitavecchia the Church of S. Andrea (11th century) was originally an ancient Benedectine provostship which became later a collegiate church with religious and administrative autonomy. Its façade has ample bays and the interior is divided into three naves. The altar-piece ordered by the abbess to the Cavalier d’Arpino portrays the patron saints: St Benedict and St Andrew.

It must be noted that St Andrew’s face is like the one painted by the same author in the fresco of the Ascension in the Borghese Chapel in St John  Lateran in Rome. In the grand architecture that frame the painting it is possible to admire in two small niches a 15th century Madonna with Child and a parchment with a water colour Annunciation, a work by an 18th century miniaturist.

Behind the grilles that face the church the enclosed nuns of the adjoining convent follow and sometimes take part to the mass singing sacred songs. Behind the gratings, religiously guarded, there are the papier-machè statue of the Madonna of Loreto, patron saint of Arpino since 1801 and the ornate platform, in wood carved by Stolz, which depicts the House of Nazareth carried by the Angels.