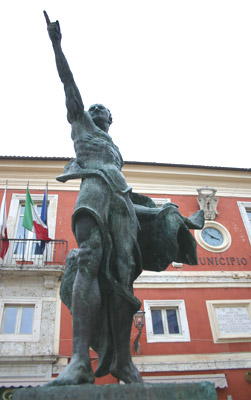 Marcus Tullio Cicero was born in 106 BC within the land of Arpino to an equestrian family in his parents villa located where the Fibreno and Liri rivers join. He considered himself as a true “Arpinate”, almost as the successor of his great fellow-citizen Marius. In the oration Pro Plancio he expresses his strong affection to his birthland when he tells about the fondness that Arpino people felt for each other and the interest with which they followed political events.

Cicero was soon sent to Rome where he studied rhetoric and law as well as philosophy and literature. He finished his training in Athens and Rhodes. His cursus honorum began in 76 BC with a quick and relentless rise: he was quaestor in eastern Sicily, then curule magistrate, praetor in 66 BC and consul in 63 BC.

During the troubled times of the Roman repubblic, he was a controversial figure: he was acclaimed as pater patriae after he foiled Catilina’s plot, but he was exiled by Clodius’s vengeance. In balance between old and new tendencies, he was undecided in taking sides; but although his political beliefs seemed to change, he was always faithful to moral values and to the Republic. He took the part of Pompeius as he struggled against Ceasar, but after Pharsalus’ battle he drew close again to Ceasar. Then he sided with Ceasar’s tyrannicides in the ides of March and he criticized Anthony in the Philippics.

As Anthony came to an agreement with Octavius, Cicero understood that his time had come. Then everything, uncertainty, hesitation, time-serving was offset by his death faced consciously and even seeked; so his words in the second Philippic sound lofty: “ And now for me, Senators, death is desirable...

My only wish is to liberate with my death the Roman people. Nothing more beautiful could I be granted by the immortal gods”. His wish came true: he was caught at Formia by Anthony’s assassins who cut his head off as he leaned out the litter. It was the 7th Dezember of the year 43 BC. The Verrine, the Catilinarian Orations, the Philippics are the highest expression of his rhetoric; the De legibus, De officiis, De republica, and the Tuscolanae gather Cicero’s thoughts, studies and analyses of the Latin spirit. Finally the Epistolae are the work that reveals Cicero’s humanity, restlessness, doubts and anxieties as a man.