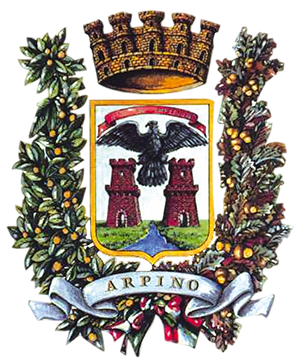 Arpino coat of arms, recorded since the 17th century, can be interpreted in two ways: first, the two towers stand for Cicero and Caius Marius, the two heroic defenders of the res publica from which the Roman Empire was born whereas the river should be the Fibreno.

Second, the two towers stand for the two rises of Civitavecchia and Civita Falconara, whereas the river is the stream Riviéte. The ieagle is the symbol which Caius Marius is said to have had put on the insigna of the Roman legions.