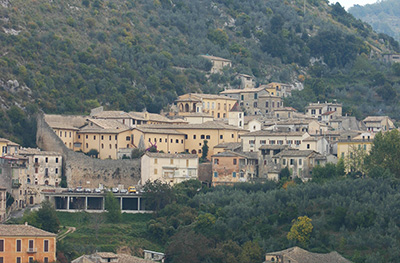 The steep but charming route of via Pio Spaccamela leads to the quarter Colle. The road is lined up with many sixteenth and eighteenth century buildings: Ruggieri Palace (at number 29) which on the lintel of the stone main entrance holds an inscription dated 1458; the church of Madonna della Pietà (16th century) which houses a statue of Our Lady of Sorrows, a work by the Austrian carver Michele Stolz (18th century); St. Rocco church (18th century) with mullioned windows and pointed arches.
At the end of via Spaccamela begins the quarter Colle. Piazza St. Andrea, paved with the typical cobblestones, was once the cloister of the convent of the enclosed Benedectine nuns of St. Andrea. On the square, on the left, there is the entrance of the convent, whose actual structure dates back to the 17th and 18th centuries. 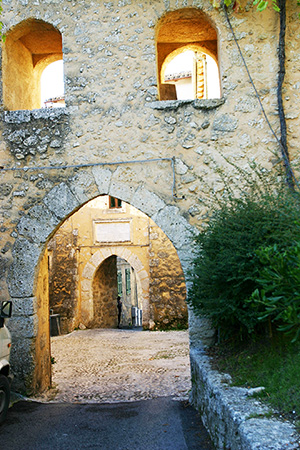 Soon after the elegant façade of the church of St. Andrea Apostolo (see Churches) stands with an ample staircase at its front. On the left, running along the church there is via Civitavecchia, which is one of the most ancient roadways, still usable, that links the town centre with the Acropolis of Civitavecchia. Along it, on the right there is Spaccamela Palace with a raised open gallery. Looking up on the left, half way up the hill slopes, your eyes meet the façade of St. Girolamo’s church.

From the square Via Saturno, joined by alleys and lanes, runs through the whole quarter and leads you to the Medieval Saturn Gate, a structure formed by two ogives, a gate and an outside gate.

Above the outside gate a Latin inscription recalls the annals of the town and the deeds of its great sons, Caius Marius and Cicero.