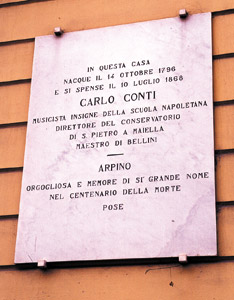 He studied as a musician (1796-1868) in Naples where in 1846 succeeded Gaetano Donizetti in teaching counterpoint and composition in the Conservatory of S. Pietro a Majella. He was one of the most famous music theorist of his time, friend of Gioacchino Rossini and Saverio Mercadante, as well as master of Vincenzo Bellini.

Many are the lyric artists and musicians that in the 18th century  were born in Arpino, whose already established musical tradition was in this way strengthened.

Among them, Domenico Gizzi (1680-1745) was a composer and singing teacher in the Conservatory of S. Onofrio of Naples; Gioacchino Conti, nicknamed the “Gizziello”, because he was Gizzi’s pupil, was one of the most famous sopranist of his time and performed in the most renowned European theatres; Angelina Sperduti, a soprano, was dubbed “la celestina” for her extraordinary voice.

How Arpino is proud of its illustrious sons is shown not only through the monuments and the cultural events but also through the names given to the streets in the old town centre, which have been named after all local figures that have brought honour to their birthtown disinguishing themselves in the field of arts, literature, spirituality, crafts and battles.
Here we have recalled only some of the most famous.