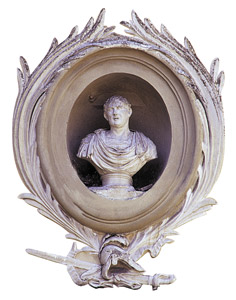 Of humble origin, Marcus Vipsanio Agrippa (63-12 BC) was a very important figure in Augustus’era. News about his birthplace are uncertain, but according to tradition he is an Arpino citizen: the third great son of Roman Arpino.
He was friend of Octavius and stood beside him since the first expedition in Macedonia against the Parthians until his rise to the throne of the Roman Empire. As governor of the Gaul, Agrippa put down the Aquitaines and pacified the Germans.

He gave Rome a naval base with the building of the Portus Julius and a mighty fleet, which under his orders defeated Sestus Pompeius first and then wiped out Anthony at Azio. He dealt also successfully with the Eastern Provinces. He died in 12 BC at the age of 51.

His cursus honorum began with the praetorship, then he was consul for three mandates, but he also revealed himself a talented builder as he accepted the office of aedile. His works were the Porticus Vipsaniae which contains the first world map (the Orbis pictus), for which he arranged the materials, the pons Agrippae, the Basilica Neptuni and finally his masterpiece, the Pantheon.

A brilliant and versatile mind, Agrippa is known also as author of orations and memoirs.