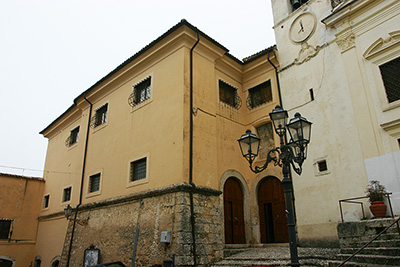 Behind the grilles that face the church the enclosed nuns of the adjoining convent follow and sometimes take part to the mass singing sacred songs. Behind the gratings, religiously guarded, there are the papier-machè statue of the Madonna of Loreto, patron saint of Arpino since 1801 and the ornate platform, in wood carved by Stolz, which depicts the House of Nazareth carried by the Angels.

Close to the church of St. Andrea, that bears the same name there is the ancient convent of enclosed Benedectine nuns; between the two there have always been religious relationships and common interests. Apart from its artistic content, the convent is important because it is the only Benedectine nun provostship that has lasted until today.

The most ancient structures are those of the warehouse, the kitchen, the refectory and the beautiful Cloister, with an open gallery leading to the community quarters, which unfortunately cannot be visited because of the enclosure. During the centuries the convent underwent many changes. 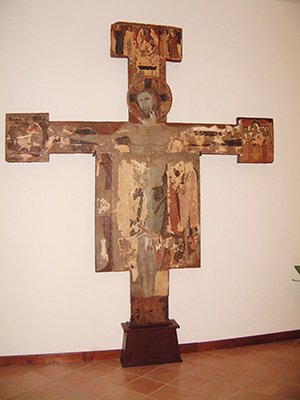 Among the works which are kept here very important is the Crucifix, recently restaured. Before the restoration it was an oil painting on a canvas nailed to a wooden frame. But the restauration works brought to light traces of another tempera painting on the wooden board, which depicts the Christus triumphans nailed to the cross with a solemn bearing and the face surrounded by the cross halo. The cross bears also episodes of the Passion. It undoubtedly dates back to the 14th century and it is from the Tuscan or Umbrian school, probably brought to Arpino by a Franciscan community.

The painting that covers this one follows the iconography of the Medieval cross, although with a different style and can be dated to the end of the 16th century.

This work and the fresco featuring St. Andrew that once embellished the lunette above the church entrance can be admired in the meeting hall.