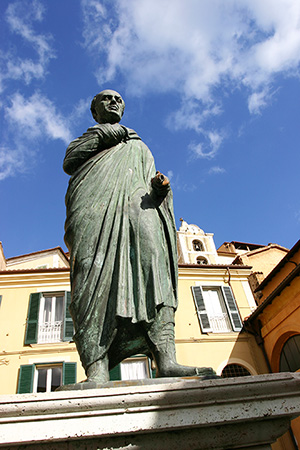 He was born in 156 BC at Cereatae within Arpino territory. Born to a humble family who was tied to the hard and thrifty costumes of Latin peasants, Marius did not have the chance to learn neither the Roman nor the Greek culture. Yet his courage and military talent during his service in Spain gained him the respect of Scipio Aemilianus who chose him as his valiant follower.

Supported by the gens Metella he became tribune of people and during his mandate he took up the cause of the people. Although the Optimates opposed him, he was called by Ceciliu Metellus as legate to his camp in Africa during the Jugurthine war. As he was elected consul, he ended quickly and decisively the war and took Jugurtha to Rome as a prisoner.

He was exceptionally elected consul five times in a row (104-100 BC) as Rome wished to entrust his most valiant commander the defence of the land whose borders were threatened by the Teutons and the Cimbrians.

He reformed tactically and socially the army which fought under the insigna of the eagle that he chose as symbol of the Roman legions. The Germans were defeated once and for all at Acquae Sextiae (Aix en Provence) and at Campi Raudii. 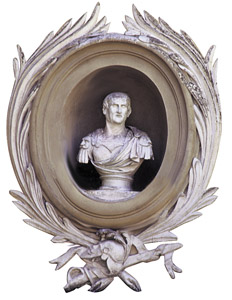 At the height of glory Marius did not forget his birthland. He donated Arpino the conquered land of the Cisalpine Gaul, whose revenue helped to support the town’s temples and public buildings. In the ethomology of the Camargue there are still traces of Marius’ presence (Caii Marii Ager).

As a politician Marius was not so successful. He supported the programme of the people party and he became their hero; but a conflict arose between him and the aristocrat Lucius Silla and led to a bloody civil war with ups and downs. Finally defeated he went into exile to Africa. He was called back and elected consul for the seventh time as many foretellings had predicted. Plutarch tells for example that seven eaglets had been found near his cradle.

Few days after the election, Marius cought fever and died. It was the year 86 BC.