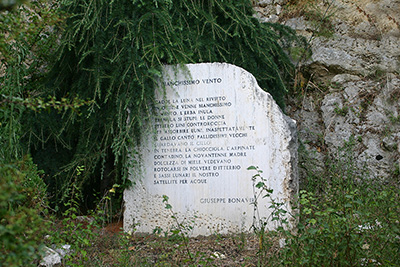 It consists in poems engraved on stone in original language and translated in Italian that famous contemporary poets, guests of the town, have written for Arpino. This initiative is co-ordinated by the writer Giuseppe Bonaviri.

The pages of this book are located in the four quarters into which the old town centre is divided: outside Porta di Saturno (at Colle) there is a poem by Giuseppe Bonaviri “il bianchissimo vento” (The White Wind); in via Vittorio Colonna, by the Church of S.Antonio, it is possible to read “Pietre”(Stones) by the Sweden Lars Forssell and “Scritto nella pietra” (Written on Stone) by Kjell Espmark; in via Caio Mario, near Ladislaus Castle (at Civita Falconara) there is “A volo d’uccello” (Bird’s flight) by the Russian Valentin Berestov; in via M. Tullio Tirone (at Arco) there is “Applauso per Arpino” (Applause for Arpino) by Pedro J. de la Peña. 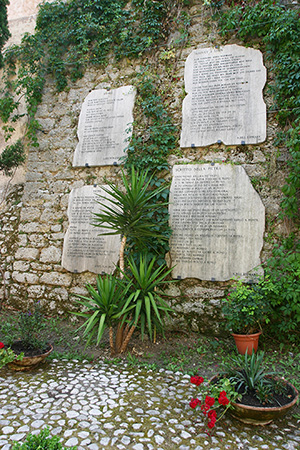